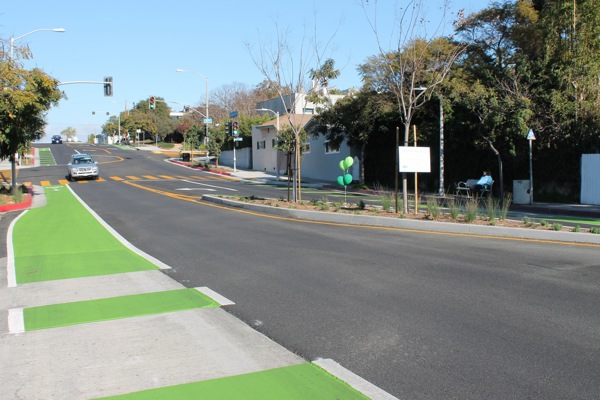 Do you live for the Double Shaka Royale at Shaka Shack? Are you a regular at Bob’s Market? Do you enjoy picnics at Clover Park or browsing the latest book arrivals at the Fairview branch library?

If you answered ‘yes’ to any of these questions, there’s a good chance you’re an Ocean Park Boulevard regular and you’ve noticed the multiple road improvements that have been made on the street over the years.

In 2008, the section of Ocean Park Boulevard between Lincoln and Cloverfield boulevards was redesigned to include bike lanes, left-turn pockets, and on-street parking, resulting in a 71 percent reduction in average yearly severe injury crashes. A few years later, in 2014, the section between the beach and Lincoln Boulevard was redesigned with additional crossings, medians, and green bike lanes, resulting in the elimination of fatal and severe injury crashes on this stretch (through 2019).

These improvements have been part of Santa Monica’s goal to improve safety on our roadways, and we’re happy to report these positive safety outcomes. For a little more detail, here are some highlights of our Ocean Park Boulevard improvements:

“Left turn pockets” are lanes that are carved into the center of two-way streets, and they’re specifically allocated to cars making left turns. These exclusive lanes serve a couple of purposes: 1) they reduce congestion since through traffic isn’t blocked by cars waiting to make left turns, and 2) they provide big safety benefits; in fact, we’ve already seen those benefits since implementing left-turn pockets on Ocean Park Boulevard between Lincoln and Cloverfield boulevards. Those new left-turn pockets — along with the addition of bike lanes — are correlated with the 71 percent decrease in severe injury collisions.

Life in the Bike Lane

Speaking of bike lanes… we added green paint to all bike lanes along the entire Ocean Park Boulevard corridor. Evidence gathered by the Federal Highway Administration has shown that green bike lanes greatly improve safety. Why? Simply put, the bright color helps people who are biking position themselves accurately within the lane while reminding those driving to take extra precautions.

We also closed a gap in the westbound bike lane between Lincoln Boulevard and 10th Street — ensuring that those riding are consistently protected along the entire street.

Ocean Park Boulevard is home to four elementary schools, a middle school, a high school, and very close to Santa Monica College’s main campus — not to mention multiple small businesses, restaurants, churches, and Clover Park. All these areas see a lot of foot traffic and for that reason, we’ve made a few upgrades specifically meant to safeguard those who are walking.

At 29th and 30th streets, we’ve added flashing beacons that alert motorists to people crossing. The Federal Highway Administration has found that these beacons significantly increase the number of drivers properly yielding right of way to those who are walking, which, in turn, leads to a decrease in collisions.

We’ve also added safety signal timing enhancements at 17th, 20th, 25th, and 28th streets. These safety signal enhancements give pedestrians a 3 to 7-second head start to begin crossing before cars enter the intersection. This increases the visibility of those walking while reminding those behind the wheel to give them the right of way, and — impressively — they have been shown to reduce collisions by up to 60%.

On the Mark On Ocean Park

One more thing: we added more on-street parking too!

If you’ve read this far, there’s a good chance you’re a regular on Ocean Park Boulevard — and perhaps you even live or work nearby. For that reason, we wanted to keep you updated on the results of these road improvements and how they’re working to keep us all safe in Santa Monica.

NOTE: This post was updated on 1/7/2020 to reflect that the street was redesigned in phases and to clarify the collision reduction percentage for each phase.