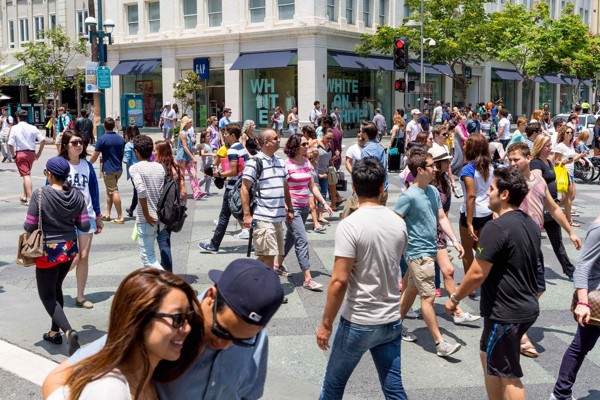 Ironically, its runaway success was a surprise -- and followed three decades of unsuccessful city efforts.  In the late Fifties, downtowns across America were losing businesses and shoppers to new suburban developments.  A few cities decided if they couldn’t beat the competition, they would try to join them.  They blocked off car traffic from their main streets in an attempt to mimic suburban malls.

Santa Monica was one of the cities that jumped on this fad.  Almost all of them failed -- including Santa Monica’s “Third Street Mall.”  Desperate, the City assembled and tore down the two blocks at the southern end of Third for a new suburban mall that opened in 1980 (now Santa Monica Place.)  By that time, Third Street was full of vacancies, second-hand stores and dying retailers. A handful of visionary civic and business leaders and Third Street property owners decided something had to be done.  They hired a brilliant young designer and eventually floated a bond to pay to build his striking new plan for a street that could be opened or closed to traffic, depending upon the hour of the day.  Serendipitously, the City also mandated that the new multiplex theaters replacing single-screen venues could not open anywhere in Santa Monica besides the future “Promenade.”

When the construction fences came down in 1989, the new Promenade became an almost instant draw for movie goers, diners, shoppers and people watchers.  Within a short time, the pedestrian surge eliminated any need to open the street for cars.  Over the next twenty years, the Promenade evolved into one of the most cherished and valuable three blocks of real estate on the Westside.  Ultimately, it would force a major make-over of Santa Monica Place to emulate the open air draw of the Promenade.  In fact, the Promenade became such a successful magnet for millions of visitors that locals often complain that they don’t go there anymore because it is too crowded.

Recently, however, the Promenade has begun to show its age.  The paving and street elements that were so fresh in 1989 look worn and tired.  If it were a private shopping center, it would almost certainly have had one or two major “make-overs” by now.  But the Promenade’s enduring popularity kept rents and revenue to the City high.  So there was no major reinvestment until this year when the topiary dinosaur fountains got a modest refurbishment.

With “brick and mortar” retail undergoing a national transformation, the Promenade’s tenant mix is also showing its age.  Once, national brands did not hesitate to locate three-story flagship stores (J. Crew, Banana Republic, Barnes and Noble etc.) or invest in splashy regional anchors like the Apple Store.  Now, competing with Amazon and other online retailers, national brands are shrinking -- and rethinking their approach to street retail.  The Promenade has its highest vacancies since it opened thirty years ago.  The northern-most block has been hit the hardest.

Neither the city nor property owners are standing still.  With the adoption of the Downtown Community Plan last year, we have been focused on the health of the heart of our Downtown.  A year ago, we began planning a future vision for Promenade 3.0 with Downtown Santa Monica Inc.  A series of meetings and public forums raised awareness and has sparked interest in a public-private partnership to bring back the magic.

A pair of urban design firms have been hired to collaborate on a broad background study for reimagining the Promenade public realm – including how to strengthen connections with the totality of Downtown – including the Expo terminus, Palisades Park, Santa Monica Place, Ocean Avenue, the Pier, and the Esplanade.  The advent of e-scooters and e-bikes makes getting around Downtown quicker and easier, creating new opportunities for synergy.

Over the past two weeks, I’ve been meeting individually with the property owners of 60% (so far) of the property owners on the Promenade.  I’m pleased to report they are enthusiastic about the effort to pro-actively partner to reimagine the Promenade’s future and committed to making substantial private investment to ensure continued success.  Some common themes are emerging:

For too long, we have all taken the Promenade’s success for granted.  I am heartened by the strong interest among private stakeholders to collaborate with the City.  Back in the late Eighties, everyone knew something had to be done on Third Street, but only a few had the faith to believe a successful turn-around was possible.  With the benefit of hindsight, we know what a committed public-private partnership can achieve.  If we capitalize on the new enthusiasm for being creative, collaborative and committed to action, the next thirty years of the Promenade will be even brighter than the past thirty years.