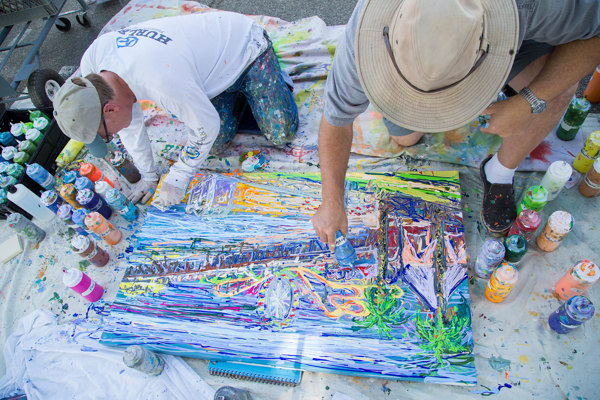 The Santa Monica Artist Fellowship program nourishes and stimulates the creation of new work by Santa Monica artists by recognizing excellence, and reinforcing our community’s high regard for creativity and innovation. Five Fellowships are awarded annually: three $4,200 Project Fellowships by application and two fellowships of $16,000 by means of a nomination process. To learn more, visit santamonica.gov/process-explainers/artist-opportunities

As the Creative Director of Jacob Jonas The Company, Jacob Jonas’s work reaches for global audiences in an effort to make the medium of dance more visible and valued. “Jacob Jonas is a true polymath: not only an artistic director, choreographer, teacher, and dancer, but a photographer, filmmaker, producer and curator.” (Dance Magazine). Jacob engages in non-traditional collaborations and has worked with artists including Kanye West, Alejandro González Iñárritu, Emmanuel Lubezki, and Vanessa Beecroft. Jonas’s choreography has been presented at the Kennedy Center, Hollywood Bowl, Lincoln Center, Wallis Annenberg Center for the Performing Arts as Company-in-Residence. He has collaborated with brands including Nike, James Perse, Sony, and The Getty Museum. Jacob founded his company in 2014 with partner Jill Wilson and lighting designer Will Adashek. @jacobjonasthecompany  (Photo: Sam Horine)

Phranc is a folksinger and visual artist who uses song, painting and sculpture to champion personal identities and illustrate the struggle, survival, and victory of the queer individual. An internationally acclaimed performer, Phranc integrates humor and a butch lesbian aesthetic to her work. Acknowledgment of her artistic accomplishments includes the GLAAD Media Award and the COLA Individual Artist Fellowship. The Butch Closet is her current multi-media project; a memoir spanning 40-years of her life as a folksinger and artist. Phranc lives and works in Santa Monica, California and Vancouver, BC. www.instagram.com/phranc.la/

Yule Caise is an award-winning Writer, Director and Producer of Film, Television and New Media. He is currently writer and Executive Producer of the upcoming limited series “James Baldwin in Paris” for UK-based Impact X. He is co-founder of Behind the Billboards, a TV development company specializing in global content. Caise was a Writer-Producer on BET’s scripted Hip Hop anthology series “Tales,” and previously had a development deal at FX Networks, in conjunction with Fox Broadcasting Co and 20th Century Fox Television.  Caise is also a Film Independent Fellow, having participated in the Screenwriters Lab with Snail Trails, his screenplay about growing up in the shadow of the Black Panther Party. His award-winning short films Shoes and Boys’ Night Out have played festivals worldwide.  Other writing credits include Showtime’s Free of Eden starring Sidney Poitier and the award-winning film Way Past Cool, Executive Produced by Milos Forman and Norman Lear. (Photo by Ori Media)

Debra Disman works in the form of the book, in forms evoked by the book, and in mixed media of her own devising. She pushes the boundaries of the book into new forms and materials, inviting altered ways of viewing the world and how we inhabit it. Disman was the featured artist for the Big Read in LA in 2016; is the recipient of a 2016-17 WORD: Artist Grant / Bruce Geller Memorial Prize to create The Sheltering Book, a life-sized book structure designed as a catalyst for community creativity; and was commissioned by the Craft Contemporary Museum to create an interactive book for the 2017 exhibition, Chapters: Book Arts in Southern California. She was a Studio Resident at the Camera Obscura Art Lab in 2018 and has served as an artist in residence with the L.A. Department of Cultural Affairs since 2017, working with the city’s diverse communities. She is also artist in residence at 18th Street Arts Center. https://www.instagram.com/artifactorystudio/ (Photo by Bernard Wolf)

Jody Zellen, the City’s first Kate Johnson Digital Arts Fellow, makes interactive installations, mobile apps, net art, animations, drawings, paintings, photographs, public art, and artists' books. She constantly thinks about ways to use new technologies and to integrate interactivity into her artworks. While her work engages with technology, she also still makes things by hand. To that end she draws and paints as well as creates interactive installations and iOS apps. Zellen received a BA from Wesleyan University, a MFA from CalArts and a MPS from NYU's Interactive Telecommunications Program. Zellen has exhibited nationally and internationally since 1989. (Photo by Brian C. Moss)