This article was written in June 2019, prior to the COVID-19 Public Health Emergency. For more information about Santa Monica's outdoor dining program during COVID-19, click here.

Have you noticed the large wooden seating areas on Main Street with people enjoying coffee, food, or conversation? These spots are part of a public space experiment called “parklets” that have popped up in many cities across America and have demonstrated that streets can be used for more than just moving people from point A to point B.

In 2015, City Council approved a parklet pilot program along Main Street to join the growing trend to reclaim city streets for public use. To accomplish this, the City started by converting two metered parking spaces into “parklets” at three different locations on Main Street: Holy Guacamole, Jameson’s (formerly Finn McCool’s), and Ashland Hill. These restaurants agreed to maintain and furnish the parklets during the pilot.

In a partnership, the three parklets were designed, built, and paid for by the City of Santa Monica and the parklet operators did their part by providing the furniture and landscaping, and by keeping them clean. 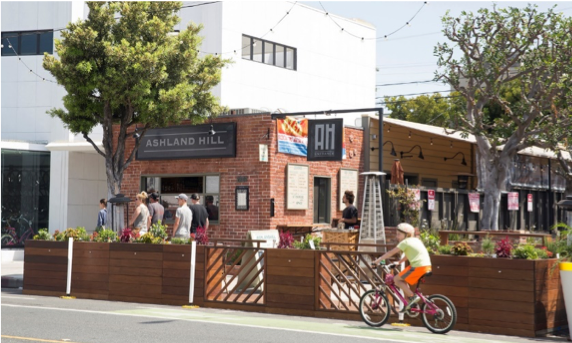 To measure their impact on the community, staff partnered with the Lewis Center at UCLA who deployed researchers to gather feedback from people walking on Main Street and parklet visitors to assess what factors contribute to a good parklet experience. On June 11, 2019, two years later after the pilot launch, staff reported back to City Council with an update on the parklets pilot, informed by UCLA’s study and by continuous interaction between City staff and the parklet operators.

Additionally, the program team learned that parklets create a rare opportunity to create public space on streets with narrow sidewalks where there isn’t currently a place to rest or sit in public.

So what's next for Santa Monica’s new parklets program? At the Council meeting, the program team was directed to expand the pilot to other parts of Santa Monica, such as Downtown, Montana Avenue, and other spots on Main Street. The team was directed to transfer the cost of building new parklets onto applicants and operators, and to develop a more robust criteria and process to guide the selection of parklet operators.

Overall, the parklets pilot has been a great success in Santa Monica and the City is eager to expand the parklets pilot throughout the City. The City team estimates their research for exploring an expanded pilot would take approximately 6-8 months when they will report back to City Council with their findings.

If you have any questions or inquiries about the parklet pilot, please reach out Russell Bunim with the City Planning Division at russell.bunim@smgov.net or 310-458-8341.