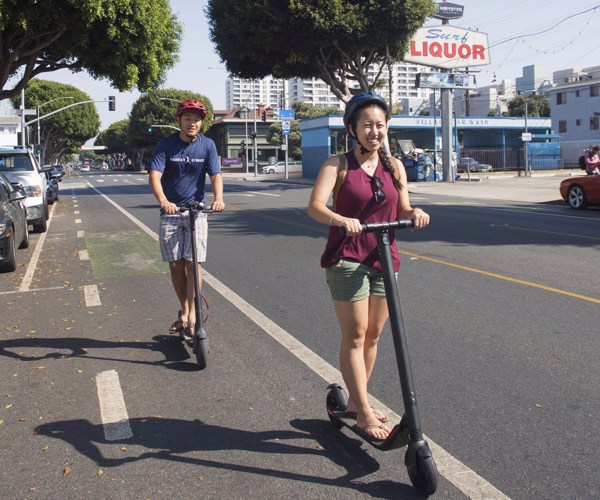 Nobody said creating 'a new model of mobility' would be easy.  Few remember the history of motor cars when they invaded cities and turned them upside down.

Back in June, after a contentious public hearing with fifty public speakers, the City Council unanimously approved City staff’s proposal for a “pilot program” to better regulate electric scooters in our community.

The idea behind the “pilot” was to sponsor a competitive process to select two scooter companies and two electric bike companies to operate for 16 months under a license agreement.  The pilot is designed to give the City greater control over operations rather than using our existing permit system to regulate these “dockless mobility devices.”

Since June, the two companies operating here – Bird and Lime – have expanded their operations to more than 100 cities in America and beyond.  Santa Monica has been flooded with more than 3000 of the scooters.  While regular riders have learned to abide by most of the safety rules set by the State of California (can’t ride tandem, can’t ride on the sidewalk, must have a valid driver’s license, must wear a helmet), the summer crush of visitors to Santa Monica daily unleashed a torrent of novice users.  These inexperienced riders have spawned widespread frustration among residents angry about users zipping down crowded sidewalks -- and scattering the devices in all sorts of inconvenient and annoying places.  The Beach Bike Path and Palisades Park became a flashpoint as the already crowded pedestrian and bikeways were suddenly subject to an onslaught of the motorized scooters.

The two companies made some important improvements – tightening their software controls to discourage juveniles from riding without licenses, deploying their scooters away from the Beach Bike Path and Palisades Park and promptly retrieving abandoned ones there.  They also deployed crews of young “safety ambassadors” to give away helmets and encourage riders to know the laws.  But those efforts were in response to strong pressure from the City – and didn’t adequately address the widespread flouting of safety laws.

Meanwhile, a handful of other California cities where the scooters had made an appearance imposed temporary bans on them (including West Hollywood, Beverly Hills Newport Beach).  Two Los Angeles Councilmembers made headlines with a call for a ban – but contrary to the impression that created – the scooter companies continue to operate there.

We moved forward with the plans for the pilot to launch in September – and drew 18 applications from 13 companies (some applied for both scooter and bike licenses.)  Based on the criteria adopted by the Council and spelled out in the application process, a committee of five staff people reviewed the applications and totaled up their scores.   Lyft and Uber-owned Jump were ranked as the top two applicants in both the scooter and bike categories.

Some have hailed the first step in the pilot selection process as long overdue accountability for Bird and Lime.  Others have denounced the rankings for giving the two automotive ride-sharing companies an opportunity to monopolize the emerging electric device market.  The current operators, Bird and Lime, have strenuously protested the fairness of the initial rankings of the applications.   They objected that they appear to have been judged on their shortcomings while giving the benefit of the doubt to other companies who haven’t actually demonstrated their ability to do any better.

Few have noticed that the actual decision will be made by the Planning and Community Development Director David Martin who will consider the committee’s scoring as well as his own evaluation of the applications along with public comment gathered over the next two weeks.  Already more than 10,000 emails have poured in.  Bird and Lime even shut down their scooters for a day and the companies joined forces to organize a demonstration before Tuesday’s City Council meeting. Public comment is open until this Friday, August 17 2 p.m.

Planning Director Martin has the challenging job of weighing all the factors and arguments in coming to his decision on which companies will be selected to participate in the pilot.

Nobody said creating “a new model of mobility” would be easy.  Few remember the history of motor cars when they invaded cities and turned them upside down – or the decades of battles over enforcing safety rules and battling over how cars radically altered streets and neighborhoods.  America – with the Los Angeles region in the lead – devoted trillions of dollars to convert surface transportation to cars and trucks.  Millions of homes were demolished to make way for highways, tens of thousands of people died in car crashes each year and the nation became addicted to oil.

Now the arrival of Expo, the evolution of the Big Blue Bus system, the launch of Breeze Bike Share, the repainting and redesign of city streets and the arrival of several thousand scooters have created a new upheaval.  Young people (generally) embrace the new range of options that are often cheaper, faster, healthier and/or more environmentally sustainable than owning and driving a car.  Older people (generally) are irate that their lives and neighborhoods are being disrupted by change.

So the scooter saga continues . . .