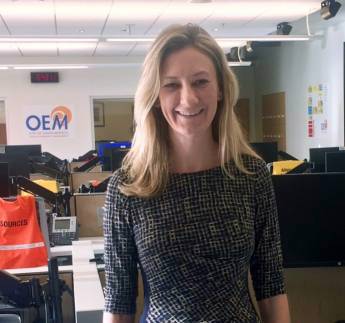 SANTA MONICA, Calif. -- City Manager Rick Cole has selected Lindsay M. Barker to join his executive team as the City of Santa Monica’s Chief Resilience Officer (CRO). The CRO oversees the City’s Office of Emergency management, including its 24/7 public safety dispatch center. In this position, Barker will also direct work to ensure Santa Monica is prepared to weather crises beyond natural disasters, including climate change and other potential threats. The position is key in leading and coordinating organization wide efforts to successfully integrate emergency preparedness planning with key resilience initiatives.

“We were looking for someone with an emergency operations background and with the vision and leadership necessary to build innovative resiliency initiatives,” said City Manager Rick Cole. “Lindsay has the required strengths along with passion and grit that will make her an asset to this community and to keeping Santa Monica resilient in a changing world.”

Barker is not new to Santa Monica. She joins the City team after more than six years with Providence Saint John’s Health Center where she directed the hospital’s emergency operations as its Director of Emergency Management and Public Safety. There, she served as the St. John’s representative to the LA Emergency Management Services Agency and the LA Regional Intelligence Center.

“I am thrilled to be able to continue my service to the City of Santa Monica,” said Barker. “I strongly believe that by working closely with residents, businesses, and local organizations, we will collectively strengthen the city’s existing resilience and better prepare our neighborhoods for any potential adverse event.”

Barker has experience working with the L.A. County Department of Public Health and has served as an emergency services training coordinator for the local chapter of the American Red Cross. She worked with the City of Santa Barbara Fire Department/Office of Emergency Services through an AmeriCorps National Preparedness and Response program. She also served as a public health preparedness associate for the Battelle Memorial Institute where she conducted studies for the US Army Center for Health Promotion and Preventative Medicine and the Department of Homeland Security, Office of Health Affairs.

She received her BA in International Service at American University and her Masters in Public Health from UCLA. Barker assumed her position on January 9, 2017 with a salary of $125,496 a year.

Santa Monica is not the first municipality to have a Chief Resilience Officer. A Rockefeller Foundation initiative called 100 Resilient Cities has given rise to the idea that communities need to have a lead strategist planning for potential threats and emerging challenges. Santa Monica is not a participant in 100 Resilient Cities, but we believe in the underlying need to be future-proof.