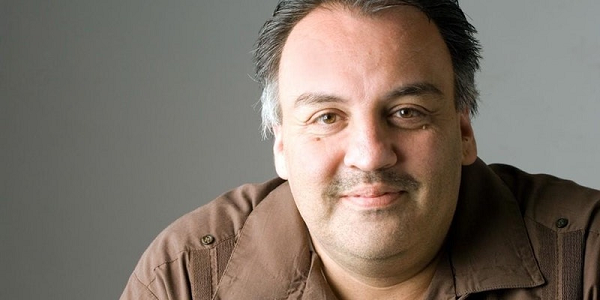 SANTA MONICA, CA — The City of Santa Monica announces playwright Luis Alfaro as the new writer-in-residence at the Annenberg Community Beach House from January 9 to March 13, 2018. While at the Beach House, Alfaro is working on a contemporary adaptation of Bertolt Brecht’s Mother Courage and her Children for Center Theatre Group with an eye on the homelessness crisis in Los Angeles. He will also continue work on The Golden State, a trilogy of plays commissioned by San Francisco’s Magic Theatre and the Oregon Shakespeare Festival. The first part, Delano, focused on a Pentecostal minister and his flock in the Central Valley birthplace of the United Farm Workers of America union.

Alfaro is working from the resident office in the Marion Davies Guest House. The public is invited to his office hours Saturdays from 11am-2pm. He is also presenting monthly public programs under the theme of “Things We Share” on Tuesdays at 6:30pm, 1/23/18, 2/20/18 and 3/6/18. From mid-January, follow his updates on beachhouseair.blogspot.com.

Luis Alfaro is a community-based writer known for his multi-faceted work in the American theatre along with his poetry, short stories and journalism. A Chicano born and raised in the Pico-Union district of downtown Los Angeles, Alfaro is the recipient of a John D. and Catherine T. MacArthur Foundation fellowship, popularly known as a “genius grant”, awarded to people who have demonstrated expertise and exceptional creativity in their respective fields. Alfaro was recently named as part of the inaugural cohort of Ford Foundation Art of Change Fellows.

His literary work is featured in more than 25 anthologies, spoken word CD (down town) and a short film, Chicanismo. He teaches at the University of Southern California. More at https://www.fordfoundation.org/campaigns/the-art-of-change-meet-our-fellows/luis-alfaro.

Reservations are available at annenbergbeachhouse.com/beachculture

An evening with playwright and Writer-in-Residence Luis Alfaro

Stop by to meet native Angeleno and playwright Luis Alfaro and listen to a fascinating overview of twenty years of art making, community building and national and international theatre work. Winner of the MacArthur “Genius Award” and a current Ford Foundation “Art of Change” Fellow, Alfaro spent ten years at downtown’s Mark Taper Forum creating and producing new American plays. Get backstage detail on plays and projects that have traveled to regional theatres across America, including adaptations of Greek classics that were featured just up the street at the Getty Villa in Malibu. Alfaro takes questions, dishes on how the theatrical sausage is made, discusses his roots in the Pico-Union neighborhood of Los Angeles, and relates his history as a performance artist and political roustabout.

“Mother of the Row” with Writer-in-Residence Luis Alfaro

Join us for a conversation with playwright and Beach House Writer-in-Residence Luis Alfaro, who is working to adapt Bertolt Brecht’s Mother Courage and her Children to highlight the issue of homelessness in Los Angeles County. From deeply personal stories of street survival, to a rundown on the facts of homelessness in the region, join us to hear thoughts through an artistic lens and a scholar’s point of view. With Alfaro, City of Santa Monica Deputy City Manager Anuj Gupta and The People Concern (formerly OPCC) Executive Director John Maceri.

A work in progress reading with playwright and Beach House Writer-in-Residence Luis Alfaro, who is working on a trilogy of plays that explore California’s Central Valley through religion, politics and identity. In The Golden State, Part I: Delano, Alfaro plunged into Pentecostalism – the fastest growing religion in the world – through the story of a minister and his flock in the Southern San Joaquin Valley town of Delano, birthplace of the United Farmworkers Union. He continues the plunge into California’s waves of religious revival, immigration and labor, boosterism and civic planning, to tell a story of how farmworkers become politicians, how politicians run cities and the development of personal and civic identities in this golden state.

This residency is part of the Beach=Culture program, an effort of the City of Santa Monica’s Cultural Affairs Division.

The Annenberg Community Beach House offers a great day at the Beach, with culture, recreation and relaxation at America’s only public beach club. Since its inception in 2009, the Beach=Culture series has engaged the public in an ongoing conversation about art and culture in unexpected places through concerts, talks, readings, exhibits and artist residencies at the Annenberg Community Beach House. @Annenbergbeachhouse