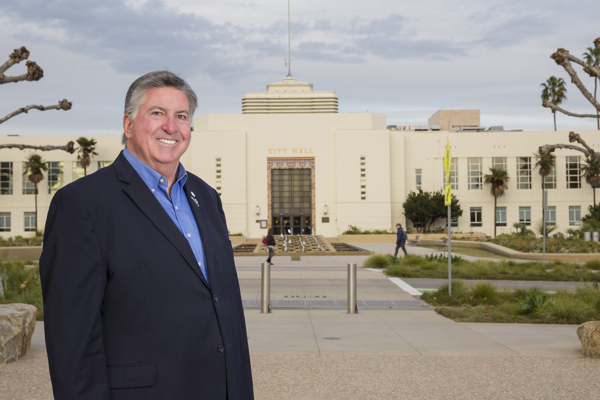 SANTA MONICA, Calif. -- Santa Monica Councilmember Kevin McKeown announced his plans to retire from his Council seat effective June 11, 2021. His service spans 24 years and six terms, including two stints as Mayor in 2015 and 2020.

At last night’s City Council meeting, Councilmember McKeown shared: “Thank you.  I am grateful for the many years I had the privilege and honor of being able to be of service to the city I deeply love.”

Kevin McKeown has been a Santa Monica renter for 45 years, and for 25 years, McKeown served local children and teachers as Macintosh computer consultant for the Santa Monica-Malibu Unified School District. On the Council, where he is in the third year of his sixth term, McKeown focuses especially on renter issues, affordable housing, and environmental sustainability. In 2015, Councilmember McKeown made a presentation on behalf of Santa Monica to an international audience at the United Nations climate conference where the Paris Accords were agreed to. He served as Mayor in 2020, which was a uniquely difficult year in Santa Monica history.

"Kevin has dedicated his life to making Santa Monica stronger, greener, and more equitable. I personally was devastated to learn about his plans to retire, and our City Council will sorely miss his depth of experience and his punny humor. Kevin has had a unique ability to coalesce the Council around our shared values and goals and has tirelessly worked to meaningfully advance protections and support for vulnerable tenants and residents. His active correspondence with constituents has been a model of public service,” said Mayor Sue Himmelrich. “This is a man who loves Santa Monica in his bones and demonstrated unrelenting integrity and dedication to the community as a tenured Councilmember. It is hard to imagine a meeting without his perfect radio voice and comedic timing.”