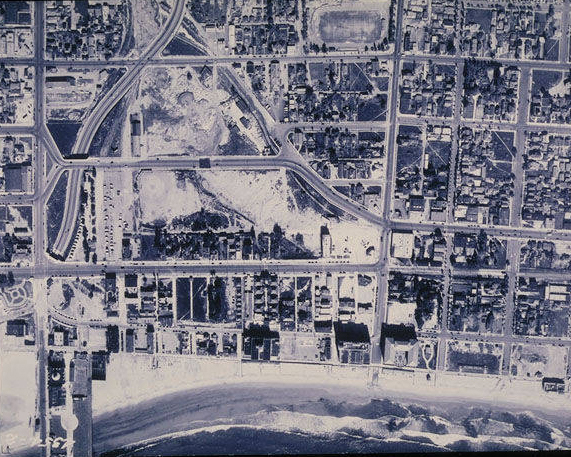 Aerial photograph of Santa Monica east to west from Olympic Boulevard to Santa Monica High School, including the Civic Center area and Belmar neighborhoods before City Hall, the Civic Auditorium and the 10 Freeway were constructed.

This article is authored by Dr. Alison Rose Jefferson and originally appeared in the December edition of Seascape.

Seduced by the offerings of the oceanfront resort town, African American pioneers came to seek their California Dream in Santa Monica as early as the late nineteenth century. As they escaped from the worst of Jim Crow laws and practices in the U.S. South, African Americans sought enjoyment of the climate and new life possibilities afforded in California. The new Civic Center Multipurpose Sports Field will be constructed on a site where some of the earliest African American residents lived and contributed to making Santa Monica a vibrant and unique place from 1900 to the 1950s.

Important businesses, such as La Bonita bathhouse and café, were located there and provided African Americans with accommodations, particularly when they came to enjoy the Pacific Ocean shoreline a few blocks away. African American families lived in clusters on streets in the Ocean Park district, including Belmar Terrace which ran along the Civic Auditorium’s eastern edge from Pico Boulevard to Main Street. Until the 1950s, most black migrants worked in domestic and service employment, while a few were small business entrepreneurs. They were strivers, joiners, and civil rights leaders of the era. Just like in other parts of the country, Santa Monica’s early African American citizens tirelessly challenged oppression and discrimination to dismantle racial barriers, at a time when civil rights laws passed as early as 1893 in California were not always being enforced.

As part of the California Coastal Commission’s broader social justice aims, a condition was added to the sports field construction permit that an informational, educational, and interpretive program be developed to educate the public about the legacy of African American citizens that once lived in this area before being displaced. In the coming months, we will be conducting community engagement workshops for Santa Monicans to provide input on public artworks and an educational program that will commemorate the history of the Belmar neighborhood, with additional artworks to be developed for surrounding areas in the future. For more information, visit santamonica.gov/arts/belmar.