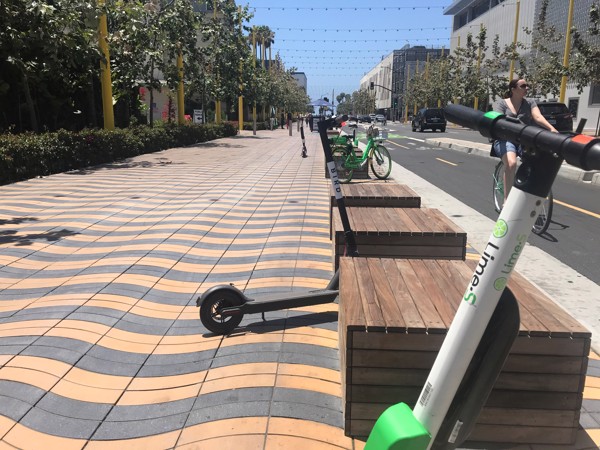 They are now everywhere.

Birds, Limes - they are in the streets, on the sidewalks, on the beach bike path and in the news.

These electric scooters appeared last September out of nowhere and now spread to more than 100 cities across the nation and beyond.  They've just appeared in Kansas City.

If you ask the millennials zipping around our city in cool shades (and without helmets) they are providing a convenient, fun and environmentally sustainable new way to get around. If you ask many longtime residents, they are a dangerous intrusion onto the streets, sidewalks and neighborhoods of Santa Monica.  The debate is raging across social media and now that the heat wave has passed, scooters are the hottest topic of talk around our community.

We thought we were getting a reasonable handle on the issue after the Council adopted the Motorized Mobility Device Pilot scheduled to start September 17.  We would go through an orderly process of selecting vendors and establishing sensible rules.  But what’s happened in the past few weeks is an explosion in usage at the very time when Santa Monica is inundated with peak summer season visitors from around the region and around the globe.  Even as commuters and residents were getting the hang of the new reality, the new reality was evolving every day as kids and tourists jumped on these devices as if they were fun toys instead of a mode of transportation that can hit speeds of 20 miles an hour or more.

All this comes on top of the challenges of running a busy beach city.  We are currently experiencing a 9% increase in Part One crimes over last year and our Police Department is dedicating extensive resources to crime fighting. They’ve still written over 1,000 tickets for scooter violations. In addition to the challenges of crime, there’s challenges related to homelessness and affordable housing.  There’s also operational challenges – including going live with the new financial system, overseeing design and construction on over 200 capital projects and strengthening our cybersecurity protections.

But for better and for worse, Santa Monica is the epicenter of this mobility revolution.

I’m pleased to report that despite the outward messiness of what’s happening in the streets, we are making progress.  We are plowing forward to have the formal pilot program in place by the September deadline (per Council direction, it will include no more than four companies, with two scooter providers and two electric bike providers and involve substantial fees from those operators to pay for administering the pilot.)

Police have developed a creative public service video to educate riders on lawful behavior and are planning a major enforcement push beginning later this month.  We were successful in forcing Lime to institute age verification software to discourage illegal usage by juveniles after weeks of their foot-dragging.  And Lime also geared down their top speed to match Bird (15 miles an hour on the flat) and removed advertising tags touting their scooters as “faster.”

The two most urgent priorities for us as usage continues to rise is getting riders off sidewalks where they present a real danger (as well as annoyance) to pedestrians – and dealing with the chaos on the beach bike path as the already overcrowded strip is invaded by inexperienced riders cutting a swath through the crowds of pedestrians, roller bladers, skateboarders and bikers with often calamitous results. We are insisting both Bird and Lime take responsibility for solving these safety concerns.  The City is also gearing up for greater public education, enforcement and pro-active regulation.

We could try to ignore this new mobility option – but that would be trying to turn back the clock. Dockless electric scooter have spread to more than 100 other cities, including Los Angeles which surrounds us on three sides. Those communities are looking to Santa Monica to set a standard for this new phenomena to operate safely and responsibly. The introductions of both cars and bikes into urban life was if anything far more painful and messy.  For better or for worse, we are figuring this out as we go along – even as the City Council and staff also try to tend to the other big challenges of life in Santa Monica.

It’s both a problem and an opportunity to lead by example.