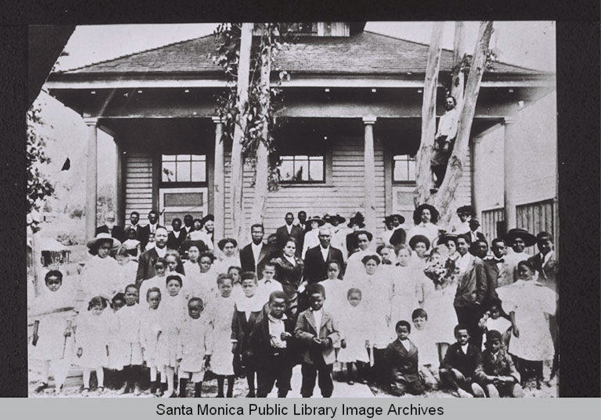 The article below originally appeared in the Santa Monica Daily Press on September 23, 2019.

In 1908 this former Ocean Park schoolhouse was purchased from the Santa Monica school board, relocated, and converted into the Colored Methodist Episcopal Church’s Phillips Chapel, the City’s first black church.

Named for its founding bishop, Phillips Chapel had a substantial role in the social and cultural history of Santa Monica’s African American community, partly due to the limited number of public spaces and private businesses that allowed African Americans to gather.

Its substantial 1940s remodel converted it from a Folk Victorian style building into a traditional Colonial Revival style building. The commemorative stained glass windows that were installed during the renovation include inscribed names of various church members. In 2006 Phillips Chapel celebrated its 100th year as a church community and as the first African American church in Santa Monica.