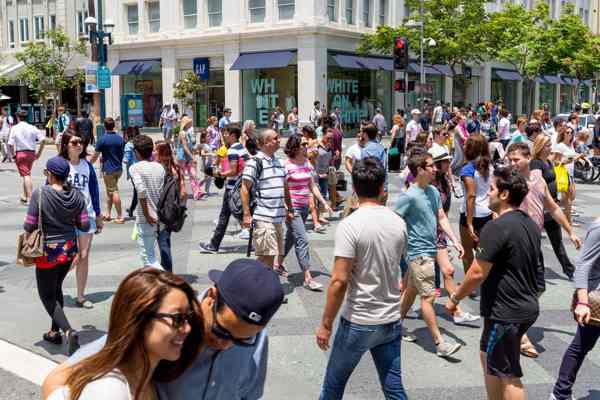 This is an abridged version of City Manager Rick Cole’s remarks from Downtown Santa Monica, Inc.’s Annual Meeting on August 31, 2017. For his full remarks, watch the video from CityTV.

If there is one message I would leave you with this morning, it is this one: Never take success for granted.

Back in 1989, the Third Street Promenade re-opened after years of debate about how to revive the historic heart of Santa Monica. It was an almost immediate blockbuster success and after nearly three decades, it has anchored the revitalization of Downtown Santa Monica.

In recent years, our problems have been the growing pains of success:

How to retain our local businesses in the face of competition from corporate chains.

How to preserve our historic character while adding infill development.

How to provide access to throngs of visitors without overwhelming our streets.

In a city as dynamic and engaged as Santa Monica, there will always be issues and challenges. This summer is different. The winds of change are swirling like a tropical storm and they feel like they are gathering hurricane force.

First, brick and mortar retail is experiencing its greatest disruption since suburban shopping malls began their assault on Main Street shopping districts decades ago.  Some are calling it a retail apocalypse. We’re seeing it in Santa Monica with flagship stores shrinking or closing, resulting in the highest retail vacancies on the Promenade in thirty years.

Second, there is a massive upheaval in entertainment. Movies are streamed everywhere – from screens as small as your phone to screens as large as an IMAX.  We can choose everything from seconds of Boomerang video clips to hours of binge-watching Game of Thrones.

Third, eating has gone from a biological necessity to a form of self-expression.  Santa Monica has been leading the way. We pioneered the farm-to-fork movement with our downtown Farmer’s Markets. The evolution from groceries to gourmet has occurred at a time when Americans are spending more money eating out than eating in. We have 421 restaurants, 147 of them in Downtown alone.

These megatrends are not the only headwinds we are feeling.  We also face three equally significant regional and local challenges.

The first regional challenge is traffic. Last summer, I took some heat for saying that traffic in Santa Monica had reached a tipping point. It hasn’t gotten better and at least in the short run, regional trends that reach far beyond our city will continue to flood our community with traffic.

Some erroneously blame this on the Expo Line.  They don’t realize that the same issues are exploding throughout the region, both in places that don’t have trains and places that have long had trains.

LA is the epicenter of national housing and homelessness crises. In the face of this regional reality, Santa Monica has seen its successful programs overwhelmed by sheer numbers.

The last of our challenges is another perennial, but strictly local, issue. Because people care passionately about this city, you often hear diametrically opposed viewpoints on how much growth we want to see. Instead of building cooperative partnerships to tackle our real world challenges, too much energy goes into a divisive debate.

I would argue that our biggest challenges are not the profound changes in retailing, entertainment and dining. They are not even the regional challenges of traffic and homelessness.

Our biggest problem is realizing that our success is fragile and we have to come together as civic leaders did thirty years ago to create the Third Street Promenade and again to create Downtown Santa Monica, Inc.

Someone wiser than me taught me a simple formula for community success. Carl Guardino is a civic leader in Silicon Valley and the term he uses is “civic entrepreneur.”

So where do we stand in Santa Monica?

We are the stewards of thirty years of successful efforts by this community to create one of the most dynamic, vibrant and admired Downtowns in America.

We agree on 80% of the issues facing us and now is the time for us to come together.

Last month, the City Council unanimously adopted a new Downtown Community Plan to guide development and public policy for the decade ahead.  The process took six years, countless workshops and hearings and thousands of residents and stakeholders weighed in with their viewpoints.

Nobody got everything they asked for, but no one was ignored. The plan will preserve our historic character, add new housing and improve and expand public spaces.  It emphasizes art, culture and urban vitality.  Since we agree on 80% of this, let’s put our efforts into realizing this vision, not waste 80% of our time refighting battles. After six years of debate, it’s time to move forward, together.

We must build on our shared history, our fantastic assets, our powerful brand and our incredibly talented community.

Our shared challenge is to create a 21st Century Downtown that evolves gracefully to adapt to the new ways people shop, dine and entertain themselves.  I think we have a fantastic story to tell: Santa Monica has a real Downtown.  It’s not a sanitized mega-project, it’s not an exclusive resort enclave, its’ not a corporate theme park.

Downtown Santa Monica is one of America’s most iconic, authentic and dynamic real places.

Our Pier is the 9th Most Instagrammed Place on the Planet.

The Promenade is one of California’s most vibrant pedestrian streets.

Expo is a blockbuster success, exceeding 2030 ridership projections 13 years ahead of schedule.  Breeze Bike Share has already racked up more than a million miles of usage.

Let’s capitalize on our success while also capitalizing on our community’s reserves of compassion, common sense and shared sense of community to tackle the scourge of homelessness.

We will not solve this regional and national crisis in our 8.3 square miles – or the 220 acres of Downtown. We will also not accept that it is okay for people to be without homes, without jobs, without healthcare, without mental health services or without hope.  We will not surrender our streets and public places to misery and anti-social behavior.

DTSM, the Chamber, the City, non-profits, businesses, faith organizations and civic leaders have convened a Community Task Force. The goal is to bring to bear the entire focus of this community on relentless engagement to make sure everyone who needs help, gets help and everyone who is a danger to themselves or a danger to others is dealt with effectively. You will shortly be hearing more about this effort and I urge you to join us. This is one issue where failure is not an option.

I conclude with an urgent appeal:  Never take success for granted.

Let’s do everything in our power so that when we return next summer, we can say with pride that by working together, Santa Monica sustained thirty years of success and together we laid the foundation for thirty more.