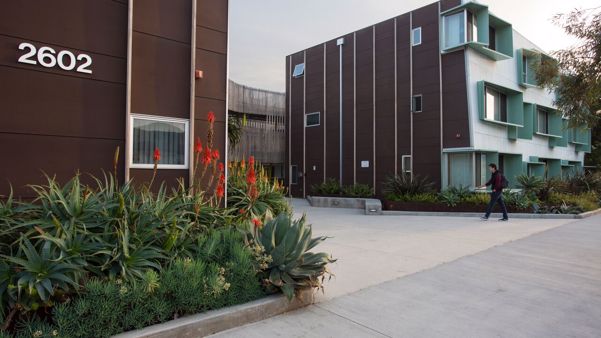 This blog post is part of a series on the Santa Monica Daily Press called Consumer Corner.

“The home is the center of life. It is a refuge from the grind of

work, the pressure of school, and the menace of the streets.

We say that at home, we can ‘be ourselves.’ Everywhere else,

we are someone else. At home, we remove our masks.”

Profit in the American City.

In their mid-pandemic search for a three-bedroom home, Denise and Greg Townsend found rental listings for three apartments that appealed to them. Located in their longtime community of Santa Monica, all three apartments featured rents low enough so that the math penciled out with the Townsends’ budget and Section 8 housing voucher.

Hope broke out between the Townsends, hope that one of these housing opportunities would come through as a new home. With their particular situation, however, a bit of desperation tinged that hope.

Greg worked as a case manager for a non-profit agency while Denise took the primary role in the care of their four children. She also volunteered with a food distribution project at their church (as she has for over two decades) and spearheaded an annual toy drive and a back-to-school drive for low-income families. In their determined and steady way, the Townsends, a Black family, had become a wonderful asset to the Santa Monica community.

But they were also a family of six living in a two-bedroom apartment. Their small home was affordable with a Section 8 voucher. That housing subsidy program, with which the Santa Monica Housing Authority pays whatever portion is needed so that a family pays no more than 40% of its income toward rent, allowed the Townsends to stay in the Santa Monica community they loved. Pre-pandemic, their small living space could serve its purpose as a home, a refuge from work and school.  Since the pandemic’s onset, however, the uses to which they had to put their small living space had multiplied and changed; their apartment now had to serve not only as a refuge from work and school, but as a place for both work and school as well.

As many working families in Santa Monica and elsewhere experienced within the first few tumultuous weeks in March 2020, public health orders affecting school and daily life were issued, and teleworking and home schooling became for many a new reality. For the Townsends, their four children were sent home indefinitely from school and daycare, and Greg began teleworking. Quickly, their home became crowded, hectic, loud, and unmanageable. Life, work, and school transformed into a struggle to stay focused and positive.

Thus, that tinge of desperation as Denise and Greg, in a search for more space that would permit their home to serve its new purposes, immediately reached out to the three landlords who had placed the rental listings.

Understandably, the subsequent wave of rejections nearly crushed them. Two of the landlords said they could not accept the family’s Section 8 voucher, while the third claimed their family was too large for the unit.

All the responses sounded like discrimination to the Townsends. Since they could not afford to hire a private attorney, the Townsends submitted three fair housing complaints to the Public Rights Division of the Santa Monica City Attorney’s Office.

It hardly seems possible that the importance of home and housing rights could be thrown into even sharper relief by any event. As Matthew Desmond put it four years ago in his Pulitzer Prize winning book Evicted: Poverty and Profit in the American City, home has long been the “center of life” and a “refuge” from work, school, and the streets.

A pre-pandemic review of Santa Monica’s approach to housing rights (the rights to safe housing, housing free of discrimination, and housing free from tenant harassment) would have shown that the City already considered these rights paramount. The City has promulgated numerous ordinances and charter provisions that protect these rights: the Tenant Harassment Ordinance, the Anti-Housing Discrimination Ordinance (which addresses Section 8 and familial status discrimination of the type confronted by the Townsends), the Tenant Relocation Ordinance, and a measure adding to the City Charter a just cause requirement for all residential evictions as well as a game-changing  requirement for warning notices in certain cases. These housing rights measures come with staff, resources, and grants to local non-profits to help enforce them.

But as illustrated by the Townsends’ mid-pandemic plight, COVID-19 has caused housing rights to have even more significance than they had before. The excerpt from Evicted about “home” as a “refuge” where we “remove our masks” has a new and twisted irony that stands out to tenants: they see that home—their apartment—is now primarily a refuge not from work or school but from a deadly virus. They must remain at home to comply with shelter-at-home orders, quarantines, and curfews. Many now work from home.  Their children no longer attend closed schools and must use the home to learn and study.  Their elderly parents or grandparents may need to move in with them to function more safely as a family pod, even though they are not authorized occupants in the lease.

Tenants also experience the new pressures these extended homestays put on a home and its amenities and utilities, even as repair efforts that involve landlord entries that could spread the virus. They need more time to pay rent for their only refuge when a COVID19-related loss of income or expense leaves them short.

Finally, more than ever before, they need legal help to work out disputes or address eviction attempts in order to keep their homes.

Meanwhile, Black and Latino tenants along with tenants with disabilities and families with children, many already reeling as inequities in employment and health care have left them hit especially hard by the pandemic and shutdowns, still face the age-old prospect of housing discrimination.

In response to these needs and the heightened state of housing rights, the City has implemented new housing rights measures along with continuing its community education and enforcement efforts:

This information will help the City assess the scope of the eviction problem and to determine what measures, such as the Right to Counsel program, should be taken or enhanced.

A recent study of Los Angeles evictions by the STOUT research firm reveals an eviction court system heavily weighted in favor of landlords who have legal representation. But once a tenant has an attorney, the STOUT report finds, they avoid a disruption in their housing over 90% of the time.

Under the City’s pilot program, beginning in the late spring, at least 75 Santa Monica households will receive full-scope legal representation in their eviction proceedings from a non-profit legal services provider.

This month, the office has announced the filing of two new cases to enforce housing rights. In the first one, filed in civil court, the City alleges that landlords mounted a long campaign of fraud and intimidation to force tenants out during the pandemic, in violation of the City’s eviction moratorium and the Tenant Harassment Ordinance. See “City Sues Landlords for Fraudulently Trying to Evict Tenants During COVID-19” (SMPD Feb. 3, 2021). In the second case, filed in criminal court, the City charges that landlords violated the price gouging laws by raising the rent too high during the pandemic emergency. See “Santa Monica Landlords Charged with Price Gouging” (SMDP Feb. 6, 2021)

In the case of the Townsend family, one of the three owners had a large property management company deliver the bad news. Once the City Attorney’s Office intervened, the company claimed that it was not aware of the City’s prohibitions against Section 8 discrimination. The three-bedroom apartment was rented to the Townsends—they’ve already moved into their new home—and the property management company changed its written policies regarding Section 8 applicants.

These efforts by the City and local housing advocates must only increase as there are many more tenants and families just like the Townsends who are trying to ride out the pandemic and remain safely housed in Santa Monica. These efforts must also adapt because while prognosticators continue to debate whether life will ever be the same again—whether we will ever be able to remove our masks—there can be no doubt that home and housing rights will never be the same again. Home remains the “center” of life and continues to need protection, but the concept of home and the challenges involved in protecting it are ever changing and all we can do is try to keep up.

Note: The names of the tenants featured in this article were changed to protect their privacy.