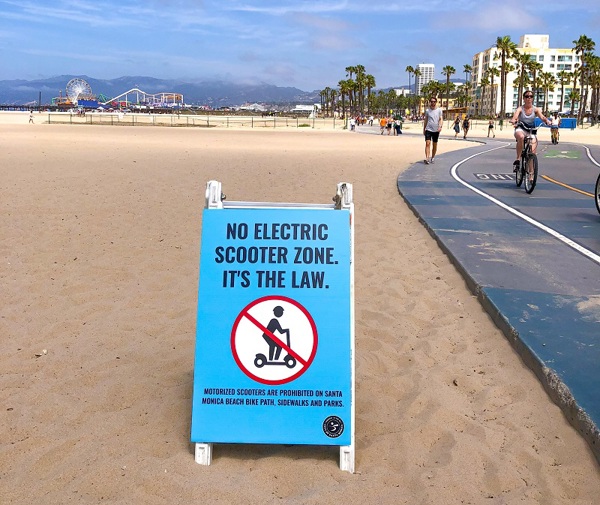 The scooter phenomena continues to spread across the nation, showing up (with or without government approvals) in Denver, San Diego, Baltimore, Atlanta, Washington DC, Oakland, Chicago, Dallas, Boston, Austin, Indianapolis, San Jose, Cincinnati, Milwaukee and dozens of other cities.

And Santa Monica — where they appeared first — continues to be a center of the raging debate over how to respond to their rapid proliferation. Regular local users seem to be getting the message (ride in the street, not on sidewalks; don’t ride tandem; you need both a driver’s license and a helmet). But the combination of summer crowds and novice users has created both dangers and annoyances for local pedestrians and drivers, who find themselves dodging the too often reckless riding of those jumping on board the scooters – and abandoning them in all kinds of awkward and hazardous places. Too many of these new users think these scooters are toys, not vehicles that can propel them into a serious collision with a pedestrian, a car or send them flying if they hit a bump or lose control.

Both West Hollywood and Beverly Hills have temporarily banned the devices until they can develop regulations to ensure safe operations. Los Angeles, however, which surrounds Santa Monica on the three sides that are dry land, is taking a similar approach to Santa Monica: launching an application process to grant formal permits in the fall and trying to cope with the upsurge in use in the meantime. 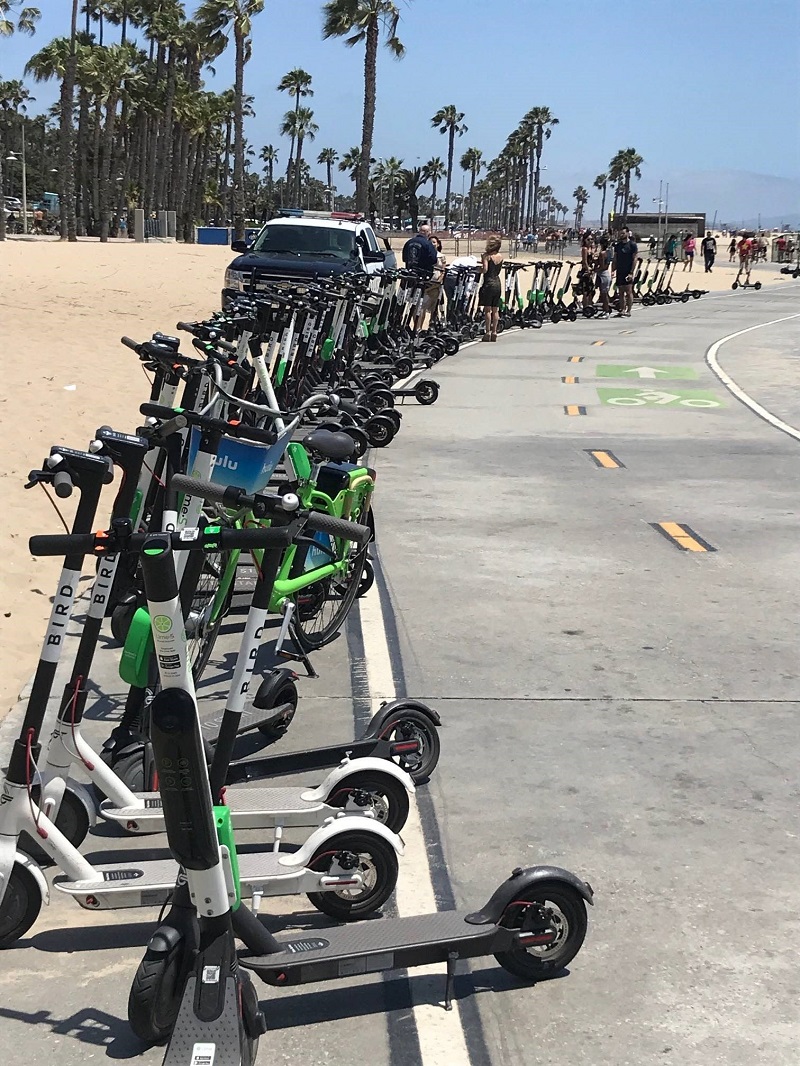 As ground zero for the scooter phenomena, Santa Monica is ahead of other cities in both the intensity of impact and the effort to educate and enforce safety laws and operational regulations. The pilot program adopted by our City Council in June will limit the number of “dockless mobility device” companies to just four for 16 months (two each for electric scooters and electric bikes.) By designing a competitive program with high standards and the ability to continue to fine tune the rules, the goal is to develop a workable model for making sure that the complicated new problems that have come from the introduction of scooters get sorted out – just as cities did for cars and bikes in earlier eras.

In the meantime, we’ve stepped up education and enforcement and pressed both Bird and Lime to take greater responsibility for the impacts they are causing. After some hesitation over whether our long-standing ban on non-human powered vehicles on the Beach Bike Path applied to the popular new devices, we put up temporary signage and instituted regular check points to enforce the law against all motorized vehicles. The companies have both complied with our request not to deploy their scooters in Palisades Park or along Ocean Front Walk or the Beach Bike Path and to promptly remove them when their riders leave them there. We’ve issued well over 700 moving violations, including at checkpoints in Downtown on July 25 that enforced and educated riders on State vehicle laws. Again, both companies participated in that effort, giving out free helmets and explaining to riders the need to comply with the laws – for their own safety and the safety of others. We’re marking sidewalks to emphasize that bikes and scooters have to be walked to protect pedestrian safety. 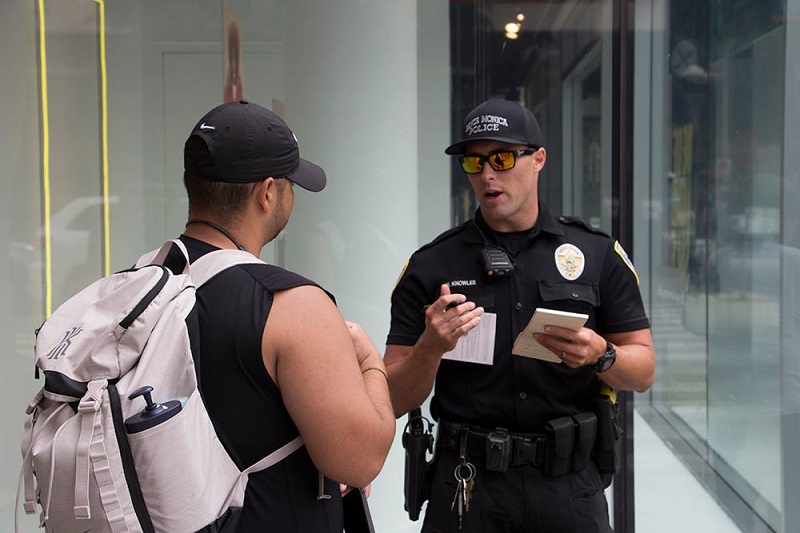 I sympathize with both those who are fed up and want them banned – as well as with those who think they are a far less dangerous and polluting alternative to cars in the city. Almost everyone complains about traffic on the Westside, but not everyone takes advantage of the many alternatives available in our area. Now with the options of Lyft and Uber (which have created their own problems), the Expo line, the 100+ miles of bike lanes (soon to be painted green like our Breeze Bikeshare), the evolution of our Big Blue Bus system, Santa Monica is seeing many viable alternatives. This wider range of choices can provide cheaper, healthier, safer, more convenient and sustainable options that will give everyone more and better choices than sitting stuck in traffic.

When motor cars first arrived in cities, they also took everyone by surprise. There was no place for them to park, no driver training or licensing, no rules or signage for safe operations and no legal framework for insurance or liability. Traffic was a deadly mess with horses, wagons, buggies, bicycles, street cars and pedestrians suddenly dealing with a growing army of cars. Gradually, cities and states sorted all that out. It wasn’t quick, easy or cheap and it isn’t perfect, but eventually it worked.

We find ourselves in a similar situation today – and cities are responding to protect public safety as well as to improve transportation options for the public good. Because this is new, there is no established rule book to guide us. We have to write the new rules – and make them stick.

That’s the approach Santa Monica is taking. Especially with other urban challenges like crime and homelessness to deal with in our community, it’s unrealistic to expect quick and easy solutions. But with the phenomenal popularity of the scooters in nearly 100 American cities (and spreading to Europe now as well), cities urgently need to establish strong regulation to protect the public and ensure responsible operations. We didn’t choose this challenge, but together as a community we can overcome it.