The article below originally appeared in the Santa Monica Daily Press on April 15, 2019.

Organ music emanates from the carousel building while inside hand-carved wooden horses race in an endless circle. Laughter resonates through the air as wooden deck boards creak beneath people’s footsteps, the rhythmic roar of the waves never far away. A cool breeze carries the aroma of hamburgers, broiled fish, and fresh-popped popcorn, all mixing splendidly with the salt air. A roller coaster thunders along its track as passengers scream with delight. Seagulls chatter above erratic rows of fishing poles propped up along the blue railing, joining in the hope for a successful day’s catch. Dancing lights invite passersby to board the Ferris wheel…

Who can imagine this pier as anything less than a fanciful getaway? Ironically, its original purpose was far from magical—it was born as a simple public utility. The growth of Santa Monica in the early twentieth century forced the city to confront a very serious sewage disposal problem. After considering several options, officials agreed that the best method was to cast it out to sea. 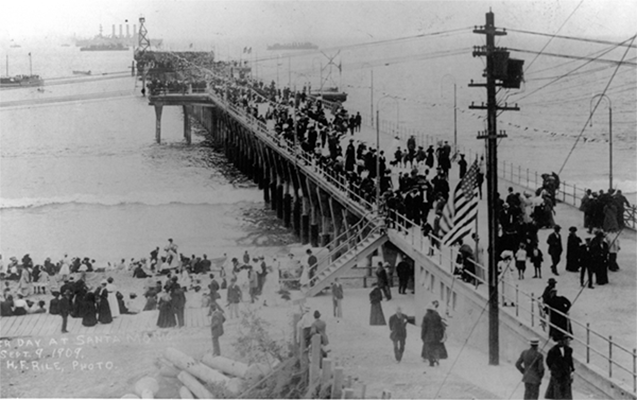 L.G. Osgood of the California Ornamental Brick Company recommended using concrete to construct the pier. Wooden piers were notorious victims both of the weather and of infestation by wood-burrowing clams called shipworms or Teredo Worms. The City Council concurred, and committed to the first concrete pier on the West Coast. On September 28, 1907, the public voted in favor of a $150,000 bond to build the proposed pier.

Of eleven plans submitted for the new pier, the City Council chose local architect Edwin H. Warner’s design, which proposed a 1,600-foot-long pier supporting an eighteen-inch outfall pipe running underneath the entire length of the pier’s floor, inclined so that gravity would carry the treated waste to the ocean. The plan included a treatment plant on the beach at the foot of the pier, designed to purify the sewage and pump it into the outfall pipe for disposal.

The construction contract was awarded to the Stutzer Cement and Grading Company and on April 8, 1908, work on the new pier began. Journalists arrived from across the country to observe the construction of the West Coast’s unique new concrete pier, and in turn became well acquainted with the charming seaside community where it stood.

On August 18, 1909 the new pier was completed with only a few minor finishing details remaining, and Mayor T.H. Dudley declared September 9 the official opening day of the new Santa Monica Municipal Pier.

Thousands of people attended the grand opening and dedication ceremony, a full day of festivities and activities commemorating the City’s magnum opus—the West Coast’s first concrete pier. The celebration commenced with a parade that began at Santa Monica City Hall and ended at the foot of the new pier, where Mayor Dudley dedicated it and the featured speaker, State Senator Lee C. Gates commended the citizens of Santa Monica for their energy, spirit and courage for using groundbreaking technology. Santa Monica, he declared, had set the precedent for all future piers.