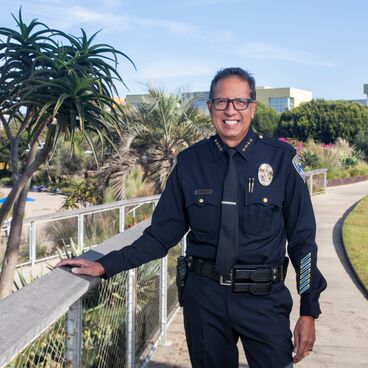 Chief Ramon Batista was born in Los Angeles, CA and grew up in Tucson, AZ, where he began his law enforcement career with the Tucson Police Department in 1986. Chief Batista worked his way through the operational ranks in patrol, spending the first 10 years of his career as an officer serving in various capacities such as a lead and training officer, traffic officer, and police academy class counselor. While promoting through the ranks, Chief Batista served for 6 years as traffic/motors supervisor, the public information office, detectives/investigations, executive lieutenant, patrol captain, SWAT/Hostage commander, chief of staff, investigations bureau chief and chief of the patrol bureau where he had oversight and care of over 600 personnel.

In 2017, Chief Batista was appointed as the police chief in Mesa, AZ, a city with a population of 535k, and over 1200 police department members. Throughout his tenure, Chief Batista has been recognized for his leadership in forging stronger bonds between the police and all citizens, collaborating with community and department members in the co-creation of new policies and procedures that promote transparency, trust; efforts that protect citizens and police officers.

In Chief Batista’s view, the policing profession will never reach a pinnacle of community outreach and dialogue. In his view, the work of building new relationships, forging foundations for trust and authenticity are never-ending.

Today, Chief Batista stays abreast of current issues in public safety and policing through his membership in the International Association of Chiefs of Police, the Police Executive Research Forum, the Law Enforcement Immigration Task Force, the American Society of Evidence Based Professionals.

Chief Batista holds a Bachelor of Science in Public Safety/Homeland Security and Master of Science degree in Leadership from Grand Canyon University. He has attended the most prestigious law enforcement executive training sessions in the country, to include the FBI National Academy, the Police Executive Research Forum, Senior Management Institute for Police and Major Cities Chiefs Association, Police Executive Leadership Institute.

In 2020, Chief Batista’s experience led him to co-author “Do No Harm” a book on inspiring a cultural shift within law enforcement organizations where members feel informed, guided and empowered to act in alignment with community and organizational values in pursuit of better outcomes for public safety.

Chief Batista was sworn in as the Santa Monica Police Department’s 18th Police Chief on October 18, 2021. He leads a full-service police department of 397 employees – 203 sworn officers and 194 professional staff and oversees an annual budget of $98 million. He is bilingual, fluent in Spanish, and he is the only appointed Latino Police Chief in the 125 year history of the Santa Monica Police Department and the City of Santa Monica.