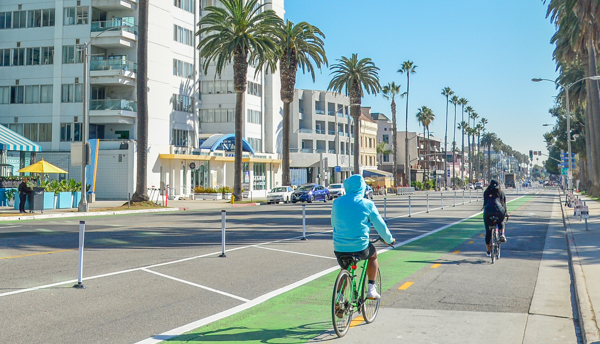 Ten years ago, Santa Monica adopted the Santa Monica Bike Action Plan and set course to re-invent the community as a nationally recognized multi-modal city that works for all roadway users. The plan outlined a 5-year strategy and 20-year vision to build a culture and community that embraces cycling as a way of life, and the citywide bike network that supports it.

The impacts of the Bike Action Plan can be felt all over the city. Since its adoption in 2011, nearly all of the 5-year plan and half of the 20-year vision has been completed. The City has installed over 100 miles of bike facilities, 19 miles of green lanes, several hundred public bike racks; introduced protected bikeways on Colorado Esplanade, Ocean Avenue, and Broadway; introduced the Expo Bike Path; and expanded the Marvin Braude Beach Bike Path.

More than creating bike infrastructure, the Bike Action Plan also laid the foundation to encourage the community to embrace cycling as everyday transportation and educate people about safe riding rules and etiquette. To that end, City staff and community partners have held hundreds of campaigns, events, and classes like Bike Month, Safe Routes to Schools, Bike it! Walk it!, Learn to Ride Classes, bike valet services, a series of monthly bike rides with the Mayor, and Take the Friendly Road, to name a few. Additionally, the City launched L.A. County’s first bike share system and first shared mobility pilot programs, which have provided the community broad access to sustainable mobility options—especially for short trips around town.

The decade-long endeavor has transformed Santa Monica into a regional leader in mobility by creating a safe and robust transportation network. We are now the example of how communities can feel and move in Southern California. In recognition of this effort, in 2020 Santa Monica was awarded a Gold Level Bicycle Friendly Community status by the League of American Bicyclists, and ranked number 72 out of 767 biking cities globally by Places For Bikes.

Much, Much More to Come

The Bike Action Plan was just the beginning. In October 2020, City Council Adopted the Bike Action Plan Amendment that expands on the goals of the original Plan with a new type of bikeway that better meets the needs of Santa Monica residents today. Protected bike lanes add separation between people bicycling/scooting and people driving. They reduce opportunities for conflict and are proven to create an environment that is more welcoming to a broader array of people of all ages and abilities. Families with children, novice riders, and those who are nervous about traffic benefit from protected facilities. Drivers also benefit from these lanes as they contribute to more predictable cyclist behavior and reduce cars from the road.

With these great strides, safety remains a primary public concern, with surveys revealing that people would feel safer biking and scooting with some form of separation from vehicle traffic. The work to upgrade portions of our bike network to protected bike lanes is already well underway. In the last year, the City has added protected facilities on Ocean Ave between the California Incline and Colorado Ave, Broadway between 16th and 20th streets, and most recently, 23rd Street between Ashland Ave and the southern city border. The 17th Street protected bike lane between Wilshire and Pico boulevards is under construction now. Several other projects are in the design phase and are slated for construction in the coming years, including Stewart Street, 26th Street, and a connection across 20th Street to unite both ends of the Michigan Avenue Neighborhood Greenway.

In the coming year, City staff will kick off the planning and outreach process to design the next round of projects in the Bike Action Plan Amendment, solicit community input, and identify a locally preferred design. More information about the process will be forthcoming on the City’s Mobility Projects web page and social media channels.

For more information you can contact Kyle Kozar at kyle.kozar@santamonica.gov

Getting Around, Transportation Planning