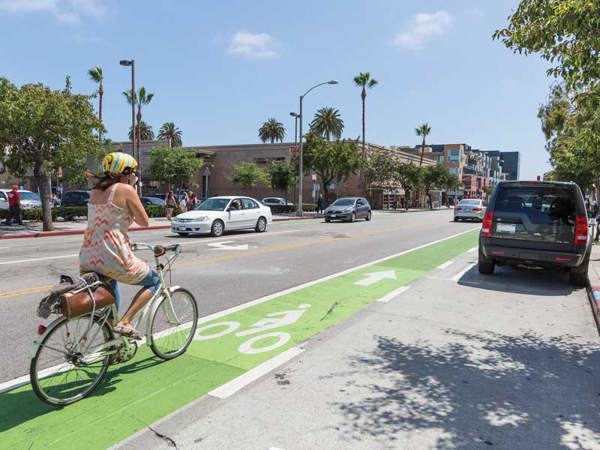 If you drive, walk, or cycle on Santa Monica’s streets on a regular basis, you’ve probably noticed those bright green bike lanes. They’re actually pretty hard to miss — and they’re designed to be hard to miss. Unlike the single white lines of the past, the green lanes provide a vivid color contrast that helps delineate the lane for biking from the lane for driving. This clear delineation gives both drivers and cyclists a constant visual reminder to keep a safe distance.

In 2011, the Federal Highway Administration reviewed evidence submitted by various agencies across the United States in cities as diverse as Chicago, Austin, Long Beach, and Missoula, Montana where green bike lanes had been implemented. After reviewing data from these experiments, the Administration concluded that these lanes vastly improve the safety of those driving and biking. More specifically, they found that green-colored lanes do several things:

In short, the improved visibility and awareness offered by green bike lanes has been proven by data to significantly enhance both driver and bicyclist safety.

Take a tour of Santa Monica’s Green Lanes on Saturday, May 18. REGISTER HERE.

So why the color green?

The color green is less likely to be confused with other traffic color signals — like yellow and white lane markings on the road, or blue and red curb markings to indicate parking restrictions.

Wait, so are driving and cycling protocols the same?

Yes. As a reminder — it’s illegal to drive a car in a bike lane unless you are safely crossing it to access parking, leaving a roadway, or are within 200 feet of an intersection and planning to make a turn. When driving, you should also use your turn signal to indicate your intention to turn, which will give anyone biking plenty of time to adjust their position.

There are also a couple variations on the green lanes that are helpful to know when you’re out on the road. These variations are meant to alert both drivers and cyclists alike that they are in areas with a higher potential for car and bikes to cross paths, like intersections, alley access points, and driveways. These variations may look like:

So whether you’re behind the wheel or behind the handlebars — be sure to pay extra attention when you encounter these bike lane variations.

An Eye On The Future

As Santa Monica moves into a more sustainable future, we want to make sure safety measures are put into place for non-emission vehicles, while still protecting the safety of those who are driving.

And, perhaps more immediately, putting these safety measures into place now means we can make meaningful progress to reach our goal of achieving zero traffic deaths in Santa Monica by the year 2026. To learn more about this goal and stay informed on how to create a safe and friendly Santa Monica, check out santamonica.gov/FriendlyRoad.