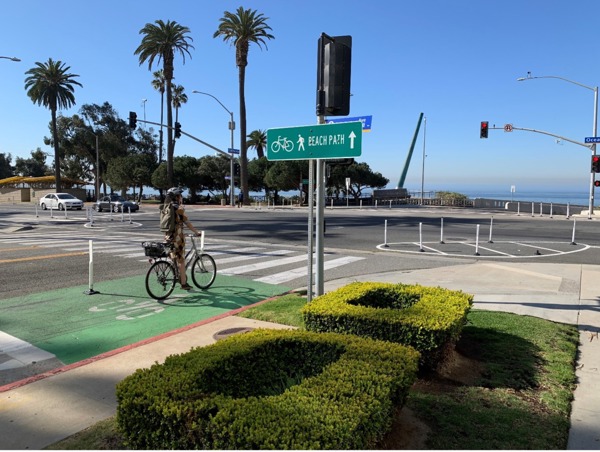 As part of the Ocean Avenue project, the City installed the first protected bicycle intersection in Santa Monica at the intersection of Ocean and California Avenue. Protected intersections use simple design concepts to make everyone safer by moderating vehicle turn speeds, increasing separation between different modes of travel, and enhancing visibility of people walking, biking and scooting. Additionally, the design addresses the multiple vehicle collisions that have occurred on the southbound approach near the start of the right turn only lane.

The protect bicycle intersection is a key feature of the Ocean Avenue project that installed a two-way parking-protected bikeway on the west-side of Ocean Avenue, between California and Colorado avenues connecting the Colorado Esplanade bike-path to the Marvin Braude Beach Bike and Pedestrian path. The protected intersection at Ocean and California Avenue closed a gap and creates safe connections between three main routes - the Ocean Avenue bikeway, California Avenue bike-lanes, and the California Incline separated bike and pedestrian path. The new design installed new corner safety islands that allow people biking and scooting to easily make left turns and connect to these three routes without ever having to merge with vehicle traffic. If you have an e-bike come try out this enhanced connection to the beach, Santa Monica City Council just recently allowed class I and class II e-bikes to be ridden on the Beach Bike path. 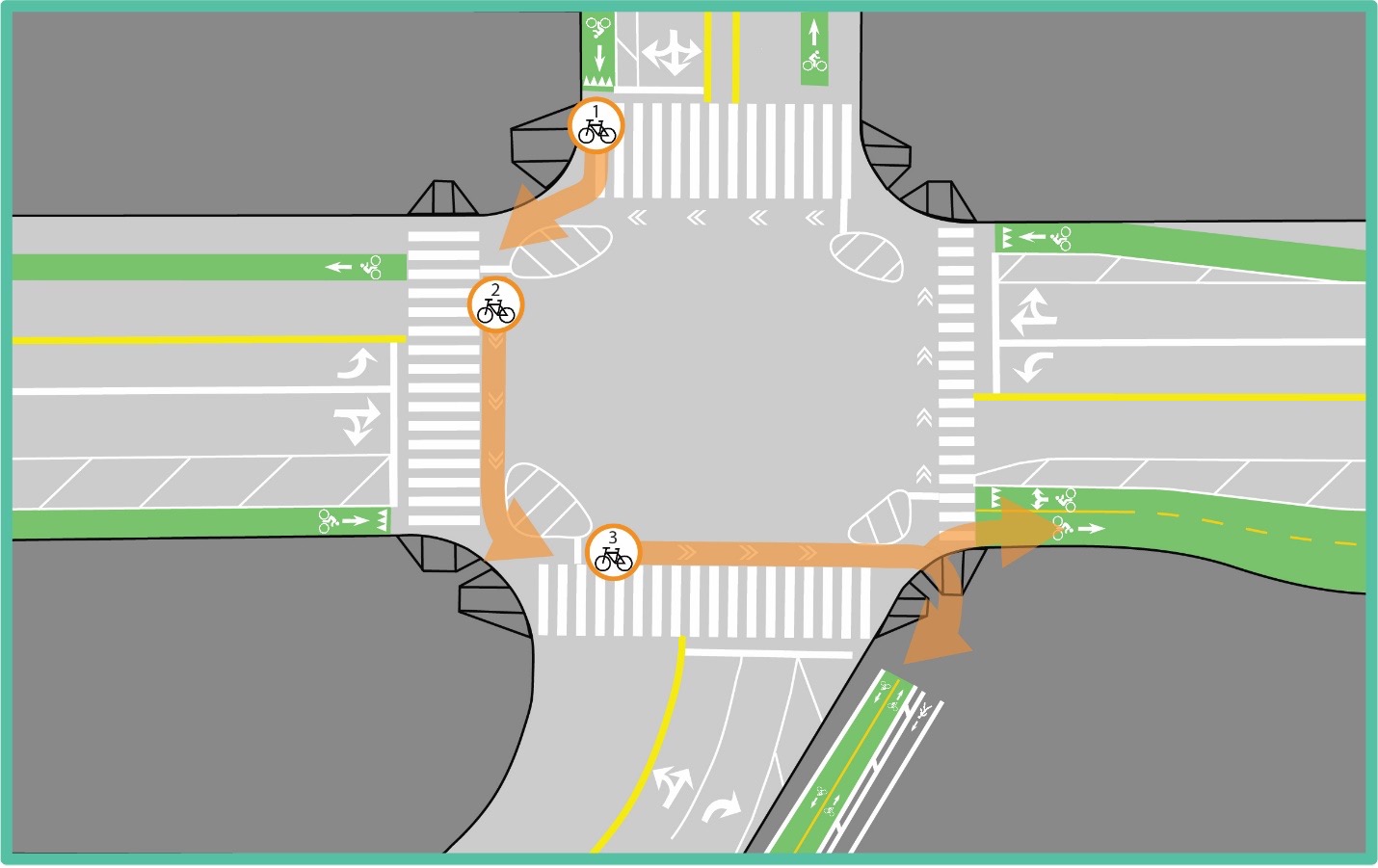 Ocean and California Avenue is one of the busiest intersections for non-motorized travel with people walking, biking, and scooting making up 37% of the people using the intersection on a typical weekend. The intersection ranks in the top fifteen in the City for most pedestrian traffic. The protected intersection is key for improving safety for these users. By adding the corner safety islands, the protected intersection moderates right turn vehicle speeds improving safety for people crossing on foot and by bike. It also improves visibility for all users by changing the angle of the right turn approach to the crosswalk. When people are crossing, drivers who need to make a right turn should wait next to the corner safety island out of the way of thru traffic until the people walking and biking safely cross. During times no one is crossing on foot or on bike, drivers making right turns should proceed around the corner safety island at a steady moderate pace. 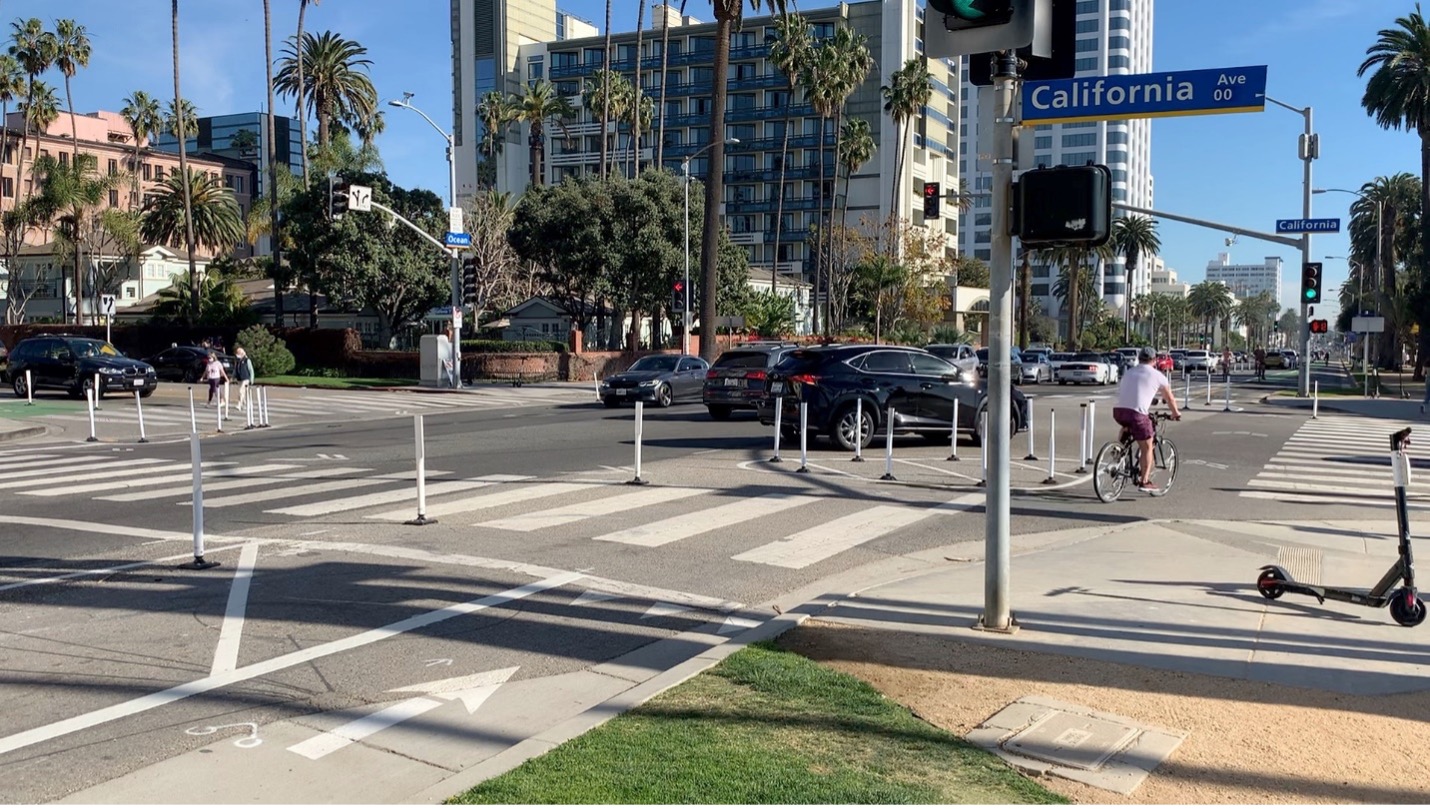 At the Protected Intersection Person Driving Yielding to a Person Biking

Staff have received many useful comments from the community that we have used to make adjustments to ensure traffic operations are working as well as possible. City crews have added additional flex posts to clarify lane designations and City engineers have adjusted the intersection traffic signal timings to maintain and improve prior traffic flow conditions. Data collected in January and February of 2021 shows that the amount of people biking and scooting on Ocean Avenue has already exceeded previous summer peak periods. As summer approaches, staff will continue to monitor traffic operations and make adjustments as needed.

Come out and take a ride on the Ocean Avenue bikeway to take in views of Palisades Park or head down the California Incline, and spend a day at the beach.